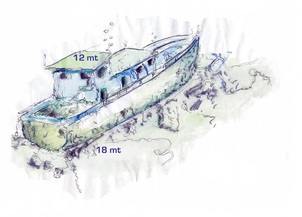 Can be reach from Roma Beach Sakala Area
20 min Tot of U/W navigation
from 1 pier)  140* after 12 min
from 2 pier) 8 min on 65*
On the Propeller at 19 - 21 mt
The Excalibur was a beautiful twin mast motor and sail vessel, around 22m in length and originally finished in white and light blue, with dark blue framing. As far as I can tell she sank some time between November 1995 and February 1996. She now rests upright (with a slight lean towards her starboard side) in a small sand lagoon in 22 metres of water. Coral boulders surround the lagoon perimeter making for a surreal setting. Much mystery surrounds her demise and over the years I have heard many different tales of her sinking. What is certain is that she suffered significant fire damage to her main cabin section and the fact that this damage, although severe, is very Centerd suggests almost without doubt that fire occurred shortly before she slipped beneath the waves. But what caused the fire? During much of my two years in Egypt, and whenever on shore, I took spending some of my evenings in Segala at a coffee shop frequented by many of the dive boat captains. Whilst drinking red tea and playing dominos (I never won a game in two years!) I kept a constant ear open for tales of new dive sites or wrecks. After first discovering the existence of the Excalibur I set about making enquiries. This was made slightly more difficult by the fact that back then I had no idea of the name of the wreck. One of the first stories I heard (and one that has prevailed over the years) is that the vessel was deliberately set on fire for an insurance claim. I also heard that the sinking was the result of a messy divorce, where one half of a marriage partnership fired the boat to stop the other taking it as a divorce settlement. I even heard that an Egyptian crew member was killed in the blaze although I find this highly unlikely in the absence of any further reports of this. Whilst the tales range from a simple electrical fire which started while the owners were ashore enjoying a sunset meal to stories of deceit and subterfuge, I must add that this is all hearsay and rumour and I have never uncovered any evidenc e to support these claims. Any factual information on the previous owners or proof of the vessels sinking would be gratefully received.

Whatever the cause of her sinking, the loss is a divers gain. The Excalibur provides a wonderful second or third dive of the day. Her main mast used to be visible from the surface starting at 4m and her 22m max depth and close proximity to shore (she can be shore dived) make her accessible to all levels of diver. 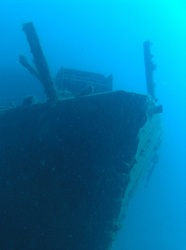 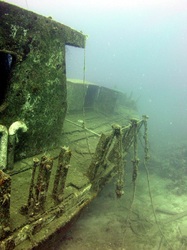 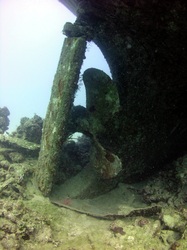 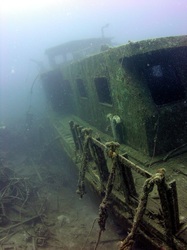 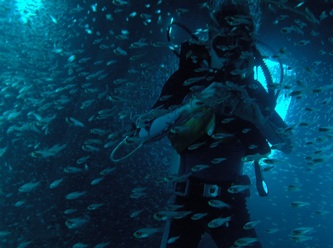 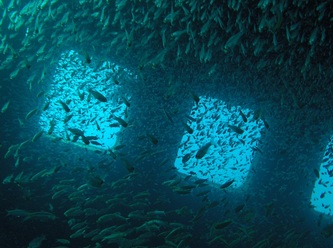 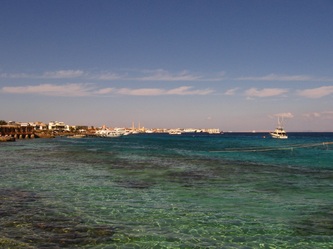